Today’s offices are so efficient that most of them don’t even use paper anymore. Everything is digital, and some are even moving away from CD’s and moving to online cloud storage to communicate with other businesses and clients. USB flash drives have become so inexpensive that they are now the portable storage of choice.

Who remembers typewriters? I remember the sound of an office in full swing, the clickety-clack of typing echoing throughout. Then there were the whispered curses when a mistake was made and the Wite-Out was needed or the correction tape. Oh, and the awesome sound of a dot-matrix printer, slowly going back and forth, printing in black and white dots. 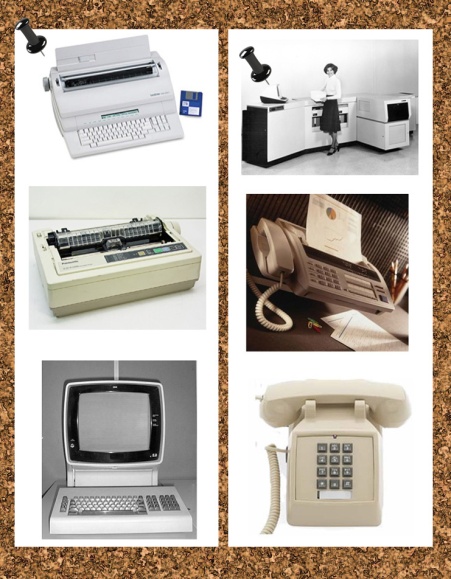 Computers were room sized until the bulky desktops were introduced that used floppy disks and had a whopping 20 megs (MB) of hard drive space! We had copiers that needed their own rooms, that were so intimidating with all their trays and doors. I always hated making copies on them.

Fax machines were equally confounding, and I avoided them at all costs. The loud screeching noise was annoying, and then the machine would beep loudly if I did something wrong (which was usually all the time) and I would walk away, embarrassed that I couldn’t master a stupid machine. I do, however, miss the simple desk phones that were common. This multi-line, many-buttoned phone that we use now never works right for me. I think it hates me. What retro office supplies do you remember?