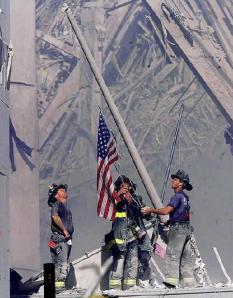 Eleven years ago today I was getting ready for work and from the living room I heard the news anchor announce that a plane had just flown into one of the twin towers.  My family and I gathered around the television, speculating as to how a private plane had gotten that off course and flew into the Towers. It never entered our minds that it was terrorism.

On my way into work, I heard about the other plane. Then walking into work, the Pentagon followed by the field in Pennsylvania. It was like a waking nightmare that day. Now, eleven years later, no matter whom I talk to can remember with crystal clear clarity where they were, what they were doing, when the nation learned we were under attack.

We’ve moved on, but we haven’t forgotten. We’re Americans, and we will fight for home and hearth. There have been a lot of ups and downs since that fateful day in 2001, but no matter what side of the political spectrum you’re on, you were wounded that day and grieved along with the rest of the country.

We’ve rebuilt. We’ve overcome. The Freedom Tower is nearing completion and is adding its light to the New York City skyline. We’ve lost soldiers and civilians in the fight against terror; brothers, fathers, sisters, and mothers. We mourn their deaths as a nation and thank them from the bottom of our collective hearts for dying to keep us safe. I will spend the day remembering their sacrifices and offering up my thanks. How do you remember 9/11/2001?